“If we do what we know and feel is right, it is bound to happen that among our graduates there will be numbered scientists, engineers, and those who go on to earn degrees in law and letters. There are likely to be those few who create new intellectual worlds, cure a dreaded human ailment or in some other way significantly influence life on our planet. Our philosophy will be to treat our charges as if each one is capable of this extraordinary achievement.”
– Dr. Leon Lederman, 1985 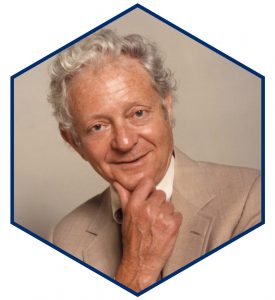 Similar to how a father feels for his own children, Dr. Lederman always had much love, affection and praise for IMSA, and high expectations for its faculty, staff, students and alumni. Since 1985, he was able to witness those successes firsthand and see the results of his tireless efforts on IMSA’s behalf.

In addition to having a profound impact for decades on the national and international scientific and educational communities, Dr. Lederman had a deep and meaningful impact on the hearts and minds of thousands of past and present students of the Illinois Mathematics and Science Academy (IMSA) in Aurora, Illinois.

Because of Lederman’s painstaking and tireless early efforts, IMSA alumni have gone on to become scientists, engineers, doctors, entrepreneurs and educators, fulfilling the dream Lederman had for IMSA students. IMSA was created in 1985 and opened its doors in 1986, graduating its charter class in 1989.

Current and past students were fortunate to receive the once-in-a-lifetime opportunity to learn from one of the world’s great scientific minds and to come to know him on a more intimate, personal level through his campus interactions in venues such as Lunch with the Laureate or the IMSA Great Minds Program.

In addition to community lectures, dialogues and interactive seminars, Dr. Lederman inspired students to take on ambitious projects that resulted in increased understanding of scientific, mathematical and technological world issues.

One such project, the book Portraits of Great American Scientists, gave 15 IMSA students the once-in-a-lifetime opportunity to publish their first book before the age of 19 and to help educate youth about the field of science as a career choice.

The book featured 15 biographies including those of astronauts Sally Ride and Story Musgrave, Nobel Laureates Dr. F. Sherwood Rowland and Dr. Charles Townes and world-renowned dinosaur hunter Dr. Paul Sereno. Just like a proud father, Lederman, who was co-editor of the book with IMSA Coordinator of Student Inquiry and Research Dr. Judith Scheppler, expressed his enthusiasm and pride about the project.

With a career that spanned more than 60 years, Lederman became one of the most important figures in the history of particle physics. He was responsible for several breakthrough discoveries, uncovering new particles that elevated our understanding of the fundamental universe.

Throughout his lifetime, Dr. Lederman has been honored by Presidents and Kings worldwide for his contributions to science including President Lyndon B. Johnson (National Medal of Science); President of Israel Chaim Herzog (Wolf Prize in Physics); President Bill Clinton (Enrico Fermi Award); and King Carl Gustaf XVI of Sweden who presented Lederman with the Nobel Prize in Physics.

Thanks to his life’s work – his passion, dedication and contributions to science literacy, and scientific breakthroughs, the Lederman Legacy will shine brightly always.

Dr. Lederman died peacefully on Oct. 3 at a nursing home in Rexburg, Idaho. He was 96. He is survived by his wife of 37 years, Ellen, and three children, Rena, Jesse and Rachel, from his first wife, Florence Gordon. For more information on the life and work of Lederman, visit digitalcommons.imsa.edu/lederman/.