The Story Behind Yare 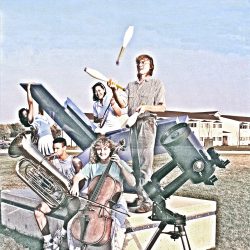 Today, valued at somewhere between $25,000 and $30,000 because of its style, there is not one person who hasn’t heard the name Yare. “It’s that big blue sculpture,” comes to mind every time someone on campus hears it. But what also comes to mind for a select few is the story of the artist who created it and how Yare came to be such a tightly knit stitch in the rich tapestry that is IMSA.

Scott Wallace has always been a passionate artist. His            mother claims, “He was just born an artist.” His pictures, even as a child, showed his interest in art. Scott grew up in Elmhurst and went to Northern Illinois University. It was during that time in his life that he became friends with artist Bruce White, the artist who would eventually create IMSA’s Entelechy.

In time, Scott became an artist in residence at Garbe Iron Works Inc. in Aurora. It was during his residency one summer that he completed a number of pieces about developing a form vocabulary. For Scott, the form of Yare suggested “spring into action quickly” by how the sculpture crosses and springs up. That’s what Yare means. For Scott, it was a form of development expression. Little did he know at the time that the word he had found in a thesaurus would live on in a community such as IMSA.

Terry Pesehia of Garbe Iron Works knew Jim Pearson and other Board members before IMSA had even opened for its charter year. It was because of this that Terry had decided to donate Yare and one other of Scott’s sculptures, Shipshape, to IMSA as gifts. The sculptures were installed just before the school opened as everyone was getting the campus ready. Scott and his mom, Frieda Wallace of Aurora, came to the unveiling and Governor Jim Thompson came to do the honors.

Today Scott teaches at the University of North Dakota. His works have acquired more content, symmetry, and imagery but still to this day he credits Garbe Iron Works as having played a major role in his success as an artist. Scott knows that Garbe took a risk in having a young artist in residence. With his career today he is well aware of how difficult it is to arrange a paid internship to produce pieces of art. Garbe Iron Works afforded a talented artist a great opportunity, something that Scott says you don’t see a lot of today.